One of our favorite topics to explore is the history of stonemasonry, so this month we are exploring a few places that featured incredible feats of architecture and stonework. You may recognize some of these places, or maybe you have never seen these before. Either way, we hope to give you a new look at these amazing places.

Stonemasonry of Ancient Greece and Rome 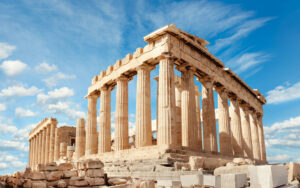 Some of the most well-known architects from history were the ancient Greeks and Romans. In fact, when historians talk about stonework, it is difficult to omit them from the record. The Greeks were incredible, persistent architects, undeterred by the destruction of invaders. In 482 BCE, the ‘modern’ Acropolis was erected. Still a sight for tourists today, the Acropolis features statues of the  Greek Gods, Athena, and Zeus, as well as mega-amphitheaters and columns constructed mainly from limestone and Pentelic marble.

In nearby Rome remains the very last theatre constructed during the period of Augustus (circa 11BCE); the majesty of the Theatre of Marcellus. This structure was one of the first to use Roman brick and was largely fabricated from tufa and travertine because of their ability to absorb water. The Theatre of Marcellus was also the inspiration of many theatres of the time, including the famous Colosseum. 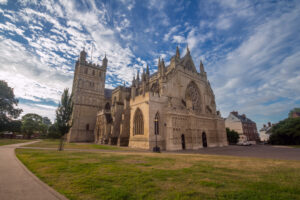 There are not many buildings surviving today that still evoke as strong of emotion as some of the old cathedrals across England. These pillars of architecture from the old world showcase the feats of stonemasons in ways not seen today. The Exeter Cathedral, properly known as the Cathedral Church of Saint Peter in Exeter, is one such feat. Exeter is an Anglican cathedral, and the seat of the Bishop of Exeter, in the city of Exeter, Devon, in South West England. Created from the popular Gothic-styled stonework, the Cathedral was fabricated from Salcombe Stone, Chalk, and Devonian Limestone mined from more than 20 different local quarries.

We could feature olde worlde stonework for days and still never cover all of the beautiful wonders from around the world. Fortunately, we do not have to travel across the ocean to behold stunning architecture and stonework. In New York City, we are lucky to look up at any skyscraper or out the window at any building in downtown Manhattan and appreciate the stonemasons who built up this city in the early 20th century. A few of our favorites are: 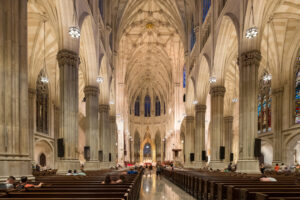 The Stonework of Petrillo Stone

While the history of Petrillo Stone doesn’t go back quite as far as the ancient architecture of England and the Middle East, we are very proud of the modern stonework we have constructed and the legacy we have built since 1907. Stonemasonry is not only our career; it is our passion. We would be honored for you to view any of our recent stonework projects.